The explanation of the title is not complicated if you think that the collection comes from a reflection on the atelier as a place of research and experimentation and that the Couture could be an excellent teaching method to go to the origin of things, meanings, clothes and ideas. 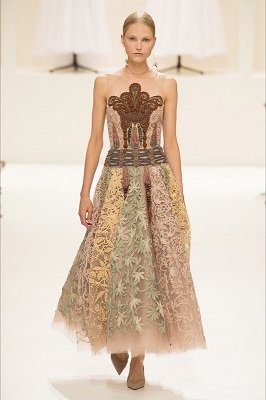 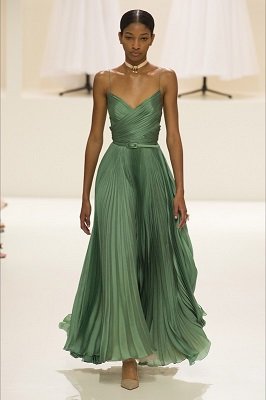 The speech that Chiuri makes with this collection is all the more important because it not only indicates that fashion is reflecting on the time in which it is born but precisely because, long from being conservative, in the light of populisms of every order and quality and the vertical fall of Value hierarchies, that is, in our present, working on tradition means studying to understand the founding values ​​and what are the superstructures born with time and made immutable by the dominated cultures. This does not mean affirming the value of tradition but studying the rules for subverting them and, in the case of Couture, opening it to new generations by making them understand the meanings that are hidden in processing and not in economic value.

Now that prêt-à-porter has reached a sophisticated industrial expression and produces beautiful and precious clothes, the Haute Couture can not remain an expression dedicated to the élites but must be explained for its value of ideas applied to dexterity to new generations that have been led to think, instead, that fashion is all the same, "says Chiuri backstage before the show.

Speaking of tradition and values, however, may seem to be a stagnation in conservation, but it is a revolutionary action if you use the rules to rewrite and update them to go to their essence. It is a discourse on value, on the importance of transferring wisdom and know-how that is also a difficult undertaking and, in the age of populism, taking on the responsibility of explaining difficult concepts means conquering that freedom that has been lost in the folds of simplification and trivialization of propaganda enacted by cultural and social content. Now, society seems to want to do without these reflections, but the urgency, on the other hand, is to react and declare itself in disagreement. Often, there are no alternatives in society, however. Those proposals that, on the contrary, fashion tries to give.

"We are too closed in our present, which makes us lose a healthy link with the past and the perspective of the future that is not composed of a series of moments. In this sense, a high fashion dress can be the projection of a dream that is realized. But not what expresses economic capacity, but a dream that regains the value of reality, of research, of the imagination of a future "insides Chiuri.

The Couture, therefore, can be a weapon of the avant-garde that today must be formed to imagine a near future not as this present makes us presage.

Chiuri works on this Dior Haute Couture collection applying all the codified rules but is more dedicated to cuts, fabrics, volumes, workmanship in general and less to decorations to build a luxury that does not necessarily have to be exhibited. If you want a Couture dress you do it to take care of yourself (Prenez soin de vous is the title of a work by Sophie Calle presented in 2007 at the 52nd Venice Biennale in which the artist invited women to autonomy aware).

A high fashion dress is not made in series, is modeled on the forms of the wearer, takes time, is not replicable and establishes a very personal relationship with the wearer. If so, then, the Couture takes on a new meaning by using just those rules of authenticity that one makes fun of today.

Authentic and sincere appears, however, the value of very simple straight nude dresses, Bar jackets with bat-winged sleeves, bustier dresses that stretch out in a pleated skirt, dresses constructed with a succession of vertical ruffles, of capes that they leave tight on the shoulders and open with wide folds, of the dresses with the flowers applied in 3 D, of the velvet sabré dresses (a technique that gets the velvet working with a scalpel a jacquard fabric, in France only two women are left to know it to do), of the New Look suit in golden fabric, of the dresses constructed with an overlay of chiffon, tulle, lace and embroidered lace all in nude color (a color that is not beige and is not pink and which takes on the tone of the complexion of he wears it), double satin dresses, a new experimentation fabric reminiscent of the duchesse, an old glory of Couture's atelier.

A collection that wants to declare one's own thought transformed into clothes and that in its minimalist appearance (the set of the parade in the garden of the Musée Rodin is a total white exhibition of Dior's story) says much more than it appears: that is, the moment has arrived to explain, to understand, to act, to struggle, to change with determination and simplicity if we want to progress in the essence of our humanist and egalitarian civilization. If we do not do it now, it will soon be very late.